In July 2008, I was sitting at a cafe in San Francisco at the BlogHer Conference with Rick Calvert, founder of the BlogWorld Expo, and Lucretia Pruitt, otherwise known as GeekMommy. I wanted to bring my team of 15 writers on the Sparkplugging Blog Network to BlogWorld in September. And I needed to find a way to do it.

Brainstorming with other web 2.0 marketers is really one of my favorite things to do. In less than 10 minutes, we hatched a plan: find a sponsor to pay for the trip. Someone who would benefit from the exposure our network could offer them, someone who wanted to get in front of SOHO business owners. In a perfect networking storm, later that very day I met Barbara Jones from the One2One Network in a women entrepreneur breakout session.

Not even 2 weeks later Barbara and I were on the phone, talking about her client, Epson. They wanted to get the word out about their two new printers launching in the fall, and she approached me about putting together a contest and exclusive cocktail party for our readers. Before I knew it, I had the opportunity to pitch my idea to Epson

Since sponsorships and social media campaigns aren’t about advertising, I put together a proposal that didn’t include one single ad buy. We were going to do what we do best – create conversations and build buzz – but this time, we invited Epson to the party.

As a business owner and an active participant in social networks, I had some solid assets to work with:

We put our proposal in front of Epson:

We were also willing to obtain a booth at the event in which our Sparkplugging writers would be available for free blog critiques for BlogWorld attendees. The booth would have been shared with Epson and the ability to print pictures from the event instantly on site. Ultimately, approval for the campaign came too late to enable us to implement this portion of the proposal.

The trip was a huge success – we built significant buzz at the BlogWorld event, with coverage of the sponsorship also being mentioned on the BlogWorld site. Epson was thrilled with the increased conversation we created on Twitter around their brand. Our YouTube videos got thousands of views, as did the special BlogWorld/Epson blog on Sparkplugging. Over the next few weeks, several of our writers received Epson products to feature and review on their blogs. We also ran a contest tive give away another printer to the Sparkplugging readers.

A month later, Epson hosted a Sparkplugging cocktail party in downtown Chicago for local women who are prominent in the social media space. About 30 women attended. The only Epson promotion we did at the party was to hire a photographer and print out pictures during the evening on the Epson photo printer to give to guests to bring home. This was extraordinarily effective because the quality of the prints spoke for themselves, and many people approached us asking for more information about the Epson products. Lastly, in November Epson put together a package in which they created a landing page on their site that offered an exclusive Sparkplugging offer at a discounted rate. We ran ads and promoted the package via Twitter. 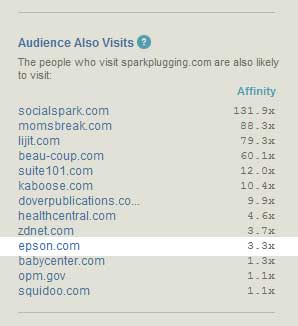 While we don’t have access to the sales totals of that promotion, we do have directly measured data from Quantcast that places Epson.com in the top ten domains that are visited by Sparkplugging visitors.

This campaign wasn’t a one-time promotion. Doing a variety of initiatives over several months was very effective in helping our audience to associate the Epson and Sparkplugging brands together.

We were cautious to never pull a hard sell approach at any point along the way. We had confidence in a great product that would sell itself if put in front of the right people.

It was the right product and the right brand for each other. Since Epson was targeting women business owners who are active in social media, Sparkplugging was able to deliver the perfect audience, and Epson was a brand that we were proud to be associated with.

It was reproduceable. Barbara Jones and her company, the One2One Network, were able to use this campaign as a springboard to reach out to other bloggers and women in social media, continuing the Epson promotion across several other sites.

And most importantly, with the Quantcast data, we have proof that the conversations we started on Sparkplugging led to greater brand awareness of Epson and a measured increase in traffic to their site directly attributable to our efforts.