In late March, I was in early talks with Ulysses Press to do another book with them, unrelated to adult coloring books. It was a KILLER title, and a KICKASS opportunity. A fulfillment of a long time goal of mine. But a nagging, persistent feeling in my gut told me that this wasn’t the right move for me to make. So I turned them down. I shed a few tears, actually, making that scary leap off of a cliff, with nothing but my intuition to give me any guidance as to how to land on my feet instead of crashing at the bottom of the fall. But as soon as I made it official, I huge feeling of calm washed over me.

April 6th. Heh. Little did I realize what I was asking for. Almost exactly one week later the Huffington Post piece ran on Coloring Flower Mandalas, and it was a game changer. A life changer. I think at that point Ulysses Press was just as happy I’d turned them down for the other book as I was, because within days I had a new book contract in my hands to illustrate two more adult coloring books for them.

Coloring Dream Mandalas is a dream come true, if I can be a little cheesball and a lot punny by saying that. 🙂 I’ve gotten significantly more creative control over this title than over my last two books, and if I could translate my entire life’s journey through heaven and hell into a coloring book, this is pretty much it. Near the end of illustrating Coloring Flower Mandalas, I really started finding a groove with my work. But with Coloring Dream Mandalas, I feel, for the first time in my life, that I’ve started to truly find my artistic voice. And it has been MAGICAL. There were only a handful of drawings in each of my first two books that I was in love with – the rest of them didn’t live up to how I saw them in my head. But with Dreams, I’m in love with almost every. single. one. of. them.

Let me introduce you to the Firefly Queen. She’s a contender for the cover of my next book, Coloring Dream Mandalas. I kind of love her. 🙂 A photo posted by Wendy Piersall (@wendypiersall) on May 2, 2015 at 6:28pm PDT

I’ve been so incredibly busy drawing stuff that I haven’t had a lot of time to color anything or post to Instagram. I’ve got 3 to show you. #SorryNotSorry for taking so much time away from posting to create more coloring books for you! 😉

I am exceedingly happy with how the art is coming together for Coloring Dream Mandalas. Like, 10 times happier than my first two books. And I was pretty dang happy with that work. 🙂 I’m almost 2/3 done – this coloring book could be out before the end of the summer!

But now that I  am DONE with Dreams, I am able to announce the second title, Coloring Ocean Mandalas.

Last month after the HuffPost piece hit, @ulyssespress immediately offered me two more book deals and asked what I wanted to do. I sent over 4 drawings, including this swan boat. I immediately began working on Dream Mandalas, but today I get to finally announce my 4th book: Coloring Ocean Mandalas! Since my husband owns a marina, it’s a rather *perfect* next project. Can’t wait to get started! A photo posted by Wendy Piersall (@wendypiersall) on May 18, 2015 at 1:16pm PDT

I plan on taking a tiny (TINY!) break between illustrating the two books to get caught up on emails, planting my weed infested garden, and start on some licensing opportunities that have come up since my work has taken off. And coloring. I plan on coloring. 🙂

Want a free sample from Coloring Dream Mandalas? Here’s one of my favorite illustrations from the book – an owl dreamcatcher! 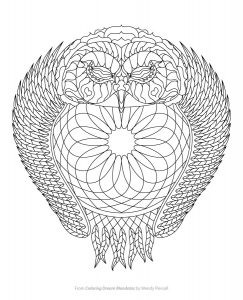