In December 2008, IZEA ran their first large-scale social media word-of-mouth marketing campaign for a well known brand: Kmart. This was also Kmart’s first jump into social media, and they had great timing. With the recession fully underway in the midst of a dismal holiday season, Kmart was perfectly positioned to get the word out about their affordable holiday gifts. They also wanted to combat some outdated misconceptions about their stores as a retailer with low-quality merchandise. Since their acquisition by Sears, Kmart began carrying quality brands such as Craftsman, Martha Stewart, Dyson, & Kenmore.

IZEA identified 6 influential bloggers who also had a strong following on Twitter to participate in the campaign, Chris Brogan, Loren Feldman, Julia Roy, Jeremy Schoemaker, Michelle Madhok, and myself. Each received a $500 Kmart gift card, as well as an additional $500 gift card to give away in a contest to one of their blog readers. Each blogger was required to write a blog post about their shopping experience, disclose the sponsored nature of the post, and host the individual contests on their blogs.

To encourage Kmart brand awareness and a viral spread of this campaign, IZEA structured the contest promotion to reward individuals for their participation in the contest:

Once the campaign was launched, people entered the gift card contest in droves. In addition to Twitter, IZEA spread the word via their social networks on Facebook, Flickr, UStream.tv and others.  By the time the contest period ended, there were 3,481 comments left across the 6 blog posts, and over 3200 Twittered contest entries. Most impressively, Kmart (green line indicator) increased their Social Media Index as measured by Vitrue a whopping 59%, outpacing parent company Sears and completely overtaking JC Penney: 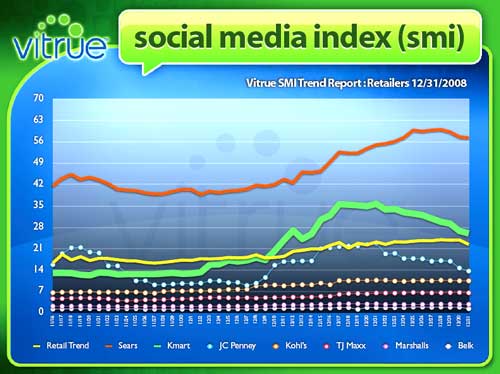 For more data on the Kmart campaign, there is a full case study on IZEA CEO Ted Murphy’s blog, including the results of post campaign product awareness surveys.

The part I find a little more fascinating isn’t covered in Ted’s case study – how did the bloggers differ from each other in regards to the success of the campaign? Who drew the most attention to the contest and why? Who drove the most traffic to the Kmart site or drove the most conversation about the campaign on Twitter?

Even though the numbers differ between the participants, it is important to note that no one person drove the success of this campaign. While we can statistically predict who might have driven the most awareness or sales, it is impossible to take one data point from the campaign and judge it separately from the rest of the campaign. Social media marketing is inherently holistic, and the success of parts of the campaign are very interdependent upon one another.

The Number of ReTweet Entries

Chris Brogan leads the pack by more than double the number of any of the rest of us. This makes sense because Chris has the largest following on Twitter of all the bloggers in the campaign, and his participation spurred significant conversations in marketing circles about the ethics of sponsored posts.

By associating themselves with Chris Brogan, Kmart best achieved their stated goal of “increased brand perception through affinity with leading online influencers.” His reach on Twitter heavily influenced the overall awareness of the campaign for everyone involved.

My post brought in the most comments of the campaign, and this makes sense for several reasons. The post was written on a contest blog on my Sparkplugging Blog Network, so we already had an established audience that was very receptive to the offer. Additionally, being able to participate as a mom on a blog targeted to moms, our readers were a fantastic fit with Kmart’s target market.

40 individuals chose to promote Michelle Madhok’s contest over the rest of the participants. My educated guess as to why is because Michelle’s blog is a women’s shopping blog, and these blogs are the easiest to monetize as a small publisher. SocialSpark user blogs are more likely to be in this genre than the rest of the blogs in the campaign.

IZEA had a sophisticated tracking system in place, and one of the things they measured was how many page views each contest post received. This allowed them to determine the CTR of each view through to the Kmart website. While some of this data is confidential,  I can say that the average CTR of the campaign was 14.7%, and that my post on Sparkplugging’s Momsational delivered a pretty astonishing CTR of 85.6%.

How is it that my post could so drastically outperform the campaign average? Again, it comes back to the right brand paired with the right audience. If this had been a Harley Davidson campaign, I doubt I would have sent more than a handful of visitors to their website. Sparkplugging has an established audience that would naturally respond to an offer from a brand like Kmart, which is heavily skewed to moms who are seeking to either make extra money or save money.

For a campaign of this scale, it was wise of IZEA and Kmart to reach out to influencers with different strengths and different audiences. Where one blogger was able to deliver more awareness, others were able to deliver more traffic or conversation around the campaign. This multi-faceted approach was especially effective during the holiday season to ensure that they could achieve the best message penetration in a short amount of time.

IZEA’s multi-platform approach across the largest social networks on the internet ensured that the campaign built buzz. It’s also a testament to just how far the company has come from their start as PayPerPost. The success of this campaign led to significant new business for the company, including a similar campaign for Sears, a newly launched campaign for SeaWorld, and campaign in the works for Jim Beam Brands.

The best results are seen when a variety of initiatives are planned over time that support each other. In fact, this campaign supported a larger campaign by Draftfcb in Chicago touting Kmart’s Layaway program for the holidays.

As we can see, if IZEA had eliminated even one or two of these components, the campaign wouldn’t have been nearly as successful as it was:

Kmart wasn’t the only one impressed with the results. The campaign was also covered by AdWeek, MediaPost, AdRants, and the Word of Mouth Marketing Association (WOMMA).